Our April meeting was once again held in Frenchay Village Hall. Although well attended, several members were unable to attend due to ill health, including Steve who was therefore unable to be there to take photos and write ups of the models. Many thanks to Eric and new member Martin W for sending their photos and to those individuals who sent additional information. Due to circumstances beyond our control there was no catering for this meeting, other than drinks, some home made cakes, and crisps. Many thanks to Lynn for coming over to help and serve the drinks at lunchtime.

We welcomed new member Martin W and also some young guest exhibitors who appeared to have a great time and helped out with ball retrieval during the Scrapheap Challenge.

Barry showed a collection of Meccano Space outfits.  In his words:

The last to Meccano outfits produced at Binns Road in 1979 were the space 2501 and the Meccanoids sets. Meccano (Airfix) then went on to produce space action packs in 1980. These were aimed at the pocket money market in 1980/81 and they were still being produced in 1981 when Meccano transferred to France. Around this time the Hyperspace set was produced and the action pack sets continued to be produced, although now packaged in yellow boxes.

One of my favourite models from my childhood was the Forklift Truck from the 1974 manual No: 7.8. I think the proportions of the model are realistic giving a smarter appearance than the previous forklift trucks I have built.

I have made more use of flat plates to add sturdiness to the model, and simplified the lifting forks as the original design was very clumsy and prone to binding.

The steering is very effective operating through a pinion and spur gear linked to a crank arrangement.

For the wheels, I have used one and half inch pulleys plus heavy duty tyres for a more realistic appearance.

The mast is extended via a simple lever, and the forks raised by means of a cord operated winding drum. The lowering of the forks is achieved via gravity. The brake is a one inch pulley with tyre flushed against a flanged plate.

This is a fine looking model, and actually works which is a credit to the Binn's Road model department. It is not motorised but provides excellent play value for all generations.

This model I designed myself after taking some inspiration from the bigger models I have recently seen.

I have added a dummy engine block to add a bit more realism, plus dummy crawler tracks.

The steering is achieved through the use of a lever linked to a simple crank arrangement which turns the model very effectively.

Motion is provided by a PDU set to a ratio at 60:1. It is operated by a Meccano battery box set at 4.5 volts. The PDU uses bevel gears to drive the road wheels (Part nos. 30a and 30c).

Conclusion: This is a simple freelance model which was fun to build given that I was not slavishly following a plan. The movement is satisfactory given the weight of the model. This is mainly due to my inclination of using flat plates instead of the lighter flexible ones. There is scope to upgrade the model to a Bulldozer at a later stage. I would also consider inclusion of a differential.

Chris B displayed his Alvis Stalwart.  In his words.......

John Ozyer-Key from the Sheffield Meccano Guild has not only built this model twice but has provided full building instructions in their magazine for those brave/foolhardy enough to build their own model!

Inspired by his write up, I began this model in 2019 and there are still a couple of building instruction parts to come. I am way behind anyway so this model won't be finished for many months yet!

The prototype was designed following the Second World War when defence chiefs realised that the next wars would be decided by tank battles over the North German Plain. This is rough terrain and includes bogs, rivers and other water obstacles and a new tank was designed - the Centurion. From bitter experience, they also realised the importance of keeping their tanks supplied with fuel and munition and so the Stalwart was born.

It is a very unusual vehicle in that it can cross water (there are no doors and the crew access the cab through the roof) and there is a fixed 6 wheel drive with only a single differential controlling the wheel speed difference for each side. This is ideal on soft ground but makes very interesting driving on hard road surfaces where "wind-up" is a constant hazard. The alternative would have been to have a series of at least 5 differentials but then each one would have needed a diff lock and before computers were part of vehicle design, this would have made the driver's job all but impossible.

Unfortunately, the model doesn't work properly yet - it needs stripping down and checking that there are adequate flats on all axles as the torques involved are really high in a number of areas. I will also take the opportunity to Locktite all grub screws!

The one problem I have had with following John O-K's instructions is that without a finished model in front of me it has been difficult to see where parts of the build were going to finish up. This is not really a criticism of John's instructions which have been very clear (if you take the time to follow them to the letter), but it is such a complicated build that for me at least, I have had to build it to this state to see where everything ties in and then go back and revise and check everything.

Incidentally, the current weight is 15kg (33lbs) and there is still the crane and bodywork to go on! 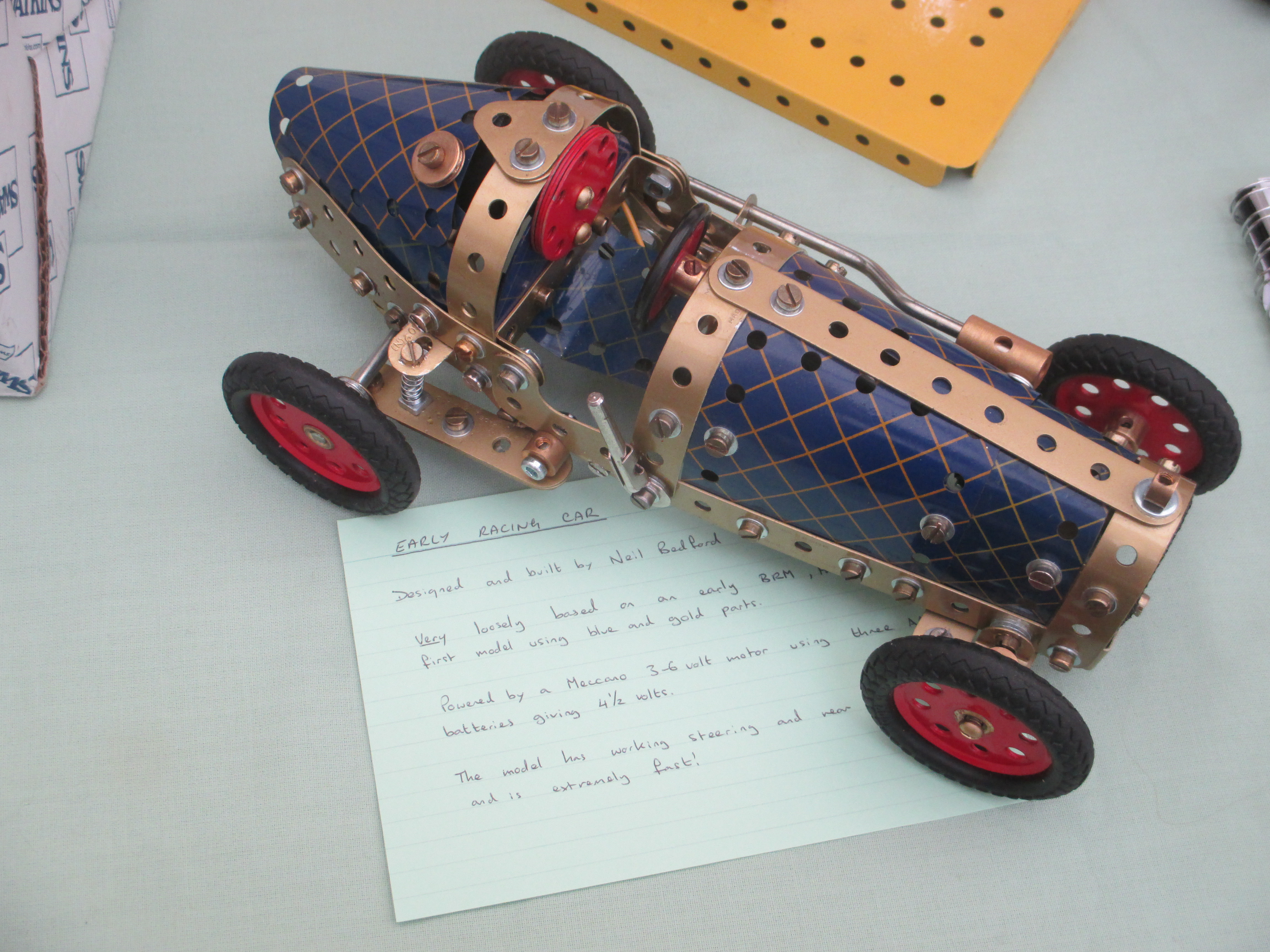 Philip brought his Steam Wagon to which he has made a small improvement adding some hand rails on the side of the cab. He also brought the workshop machine tools - the lathe, pillar drill and power hack saw seen at the 2021 April Zoom meeting.

Michael displayed his model of the Dennis Dart Bus and his three-wheeler coffee trolley. Both performed well on the floor and kept some children amused. He has recently checked over the bus mode and found the centrifugal governor to be slight out, so having adjusted this, it went very well. The model has a three speed automatic gearbox, controlled by the centrifugal governor, working steering and doors. More of both models can be seen on Michael's Page.

"I thought I would show a small selection of models from Tony Knowles’s collection of Other Systems which I am honoured to add to my own collection of Meccano and alternative systems."

A lovely model of a Tractor with grass scythe attachment from DER JUNGE KONSTRUKTEUR (East Germany).

A Blocksetting Crane made from MERCATOR (Belgium).

A very fine, sturdy and heavy model of a Travelling Crane by British manufacturer MASTERBUILDER.

Model of a Dockside Crane from MARKLIN (Germany).

Details of The Big Wheel and a video of it can be seen on 2020 April Virtual Meeting Page 3.

The Fairground Octopus Roundabout is based on model plan no. 98, designed by Hugh Henry.

At first glance it looks exactly the same as the photo on the model plan, but John was unable to get it to work in any satisfactory way with the original mechanism. So the heart of the model has been completely redesigned taking many weeks and much much frustration to get it working satisfactorily.

Pete brought his 'BABS'. Babs was the land speed record car built and driven by John Parry-Thomas. It was powered by a 27-litre Liberty aero-engine.

Pete also showed the models in the three following photos, including the Scammell Explorer.

Eric brought his model of The Light vessel 'BAR'. More information about this model can be seen on the 2022 January page.

There was also a very successful sales table and auction which raised a lot of funds for the club. Hopefully, things will be back to normal for the July meeting.