Our autumn meeting was held on the 2nd October at Richard Smith’s house with 8 members attending. Sorry, no pictures this time!

Peter Evans brought along two models. The first was a Meccano shop display model from the 1970s of the ‘Rotating Wheels’ which Pete has just renovated. The second is a Liebherr Digger to the Mike Adler design. The derrick and base are in skeletal form.

Dave Northcott also brought along two models. The first was a Bullock based on a North Midlands Meccano Gazette picture. This model featured the most prodigious use of Formed Slotted Strips (part no. 215) that any of us have ever seen. The second model was a 13:1 Gearbox utilising a differential.

Mark Biddle is building the Stothert and Pitt Dockside Crane as seen in Bristol docks. The tower is complete and the Derrick is partially complete. The whole is built from Mark’s beautifully restored (powder coated) Meccano.

Terry Childs has been developing an experimental Crane Derrick incorporating differential gears on the winches.
Neil Bedford has built a set 8 Land Rover model and then modified it to the Cuthberson caterpillar tracked vehicle used in Scotland. The tracks featured an excellent use of steel road wheels (part no. 187).

Neil has also been working on an AEC Tractor unit with ballast back. This model has been built with a combination of red/green and white Space 2501.

John Day came all the way up from Bridport for the get together. He brought along three models; the Marks and Spencer model of the Eiffel Tower in zinc finish, an open top model car in 1930s style by Meccano France and lastly, a model Bulldozer in yellow and green with caterpillar track steering.

There was a good turn-out at Malcolm’s in July with an impressive range of models on show.

Sam Medworth brought not one but three Meccanographs. One used no gears and was made from the contents of a No. 1 set whilst another was the classic supermodel version. The third was from an old MMGG magazine article. 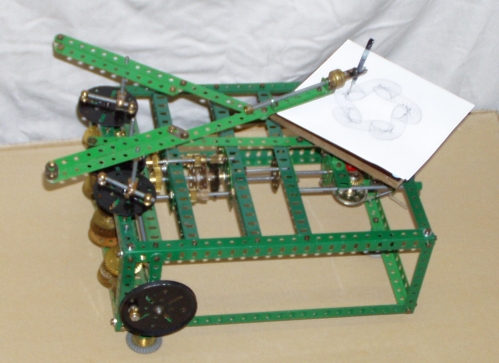 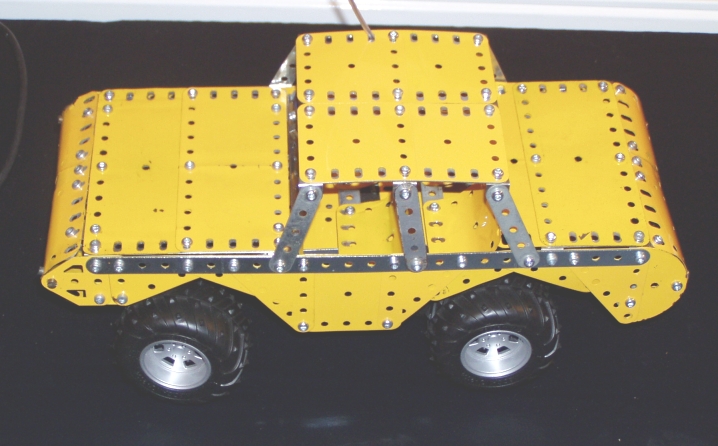 David Miller was into controllable cars with a modern radio controlled example and another using Elektrikit parts for steering. 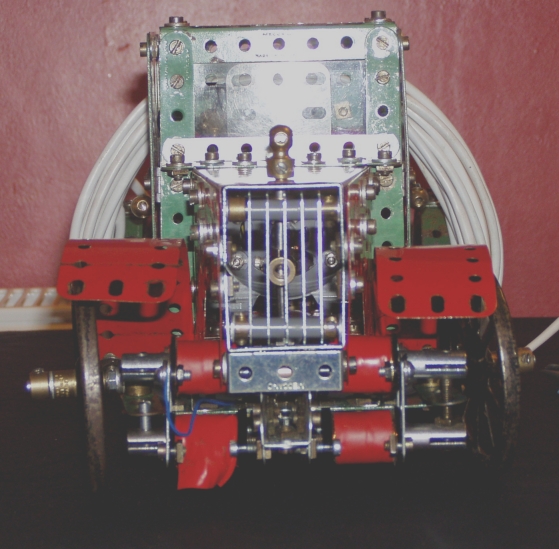 Mark Bridle is building a dockside crane and showed us the ‘powerhouse’ which uses a number of commercial electric motors.

Another ‘work in progress’ was John Day’s Blaw-Knox bulldozer based on some old model plans. John had found himself foxed by a bit of Meccano history. He could not understand that why the gearing did not quite work as it should until he learnt that early ¼” gears had 20 teeth not 19 and he had used one of these old gears at one point without realising it.

David Northcott brought a lovely planetarium based on a Michael Whiting No. 10 set model. Getting the orbits of the planets about right with just the gears in a No. 10 is quite an achievement! 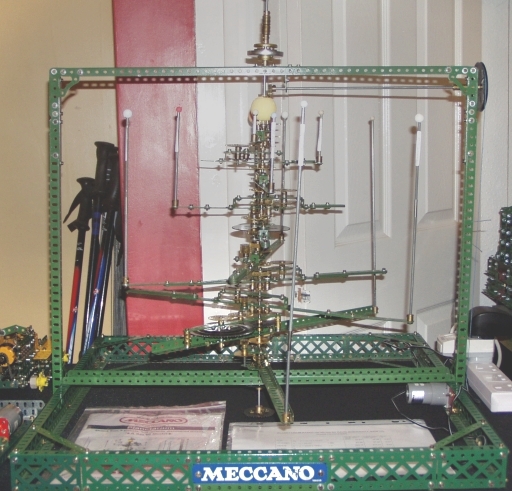 Terry Childs’ Shay class locomotive was another major achievement. We had seen the chassis at a previous meeting but were now treated to the completed project which runs beautifully. 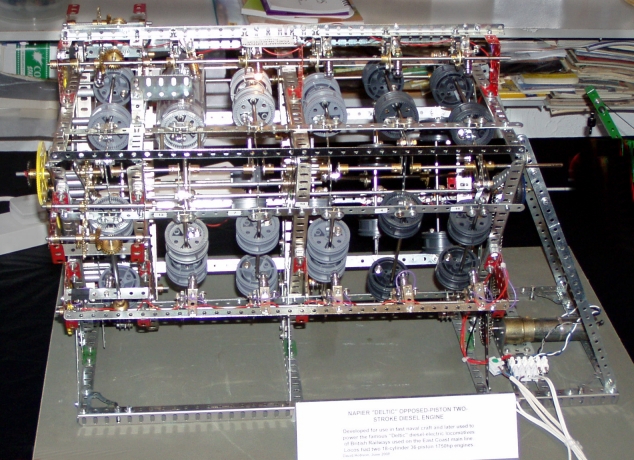 David Hobson also had a great piece of engineering history in the form of the V16 engine that powered the Deltic locomotive. The model made excellent use of Meccano parts from a range of periods and even simulated the ignition of each cylinder.

Neil Bedford brought a version of the No. 10 Lifting Shovel powered by a power-drive motor together with a Coles’ tractor that used tracks rather than straightforward wheels. 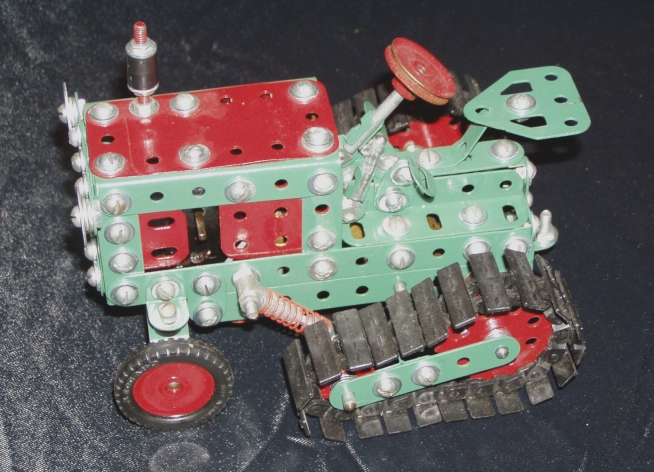 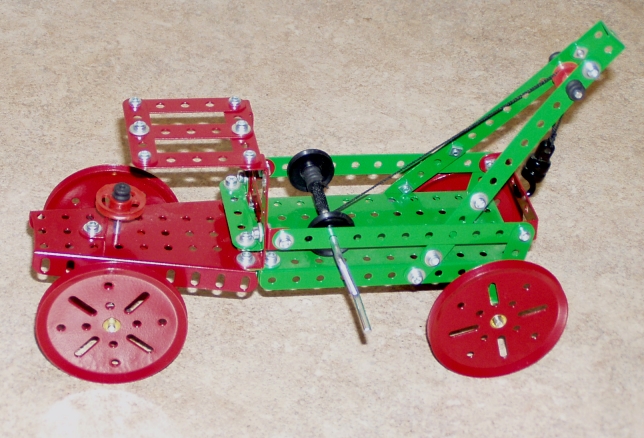 David Worth brought a lorry built from the 2007 Vintage set

David Northcott showed us the beginnings of an orrery he is working on. 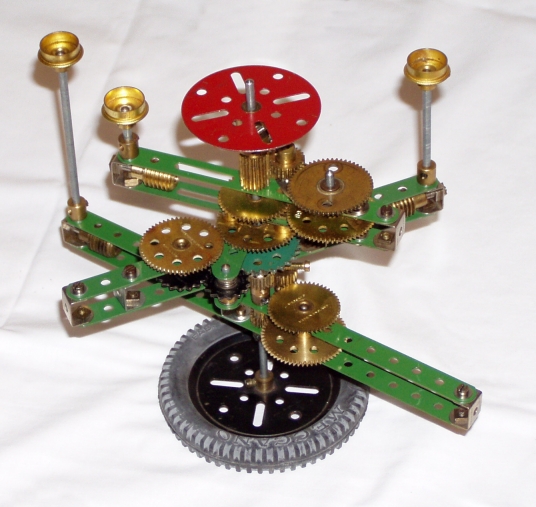 Mark Bridle was following in the footsteps of Pete Evans by building a model of a Bristol dockside crane.

Neil Bedford brought a ‘support’ vehicle for his Scammell tractor in the form of a trailer into which the battery to power the tractor will eventually go. 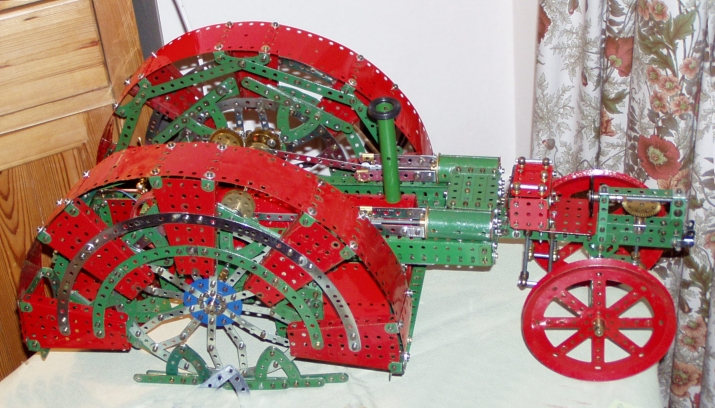 David Miller has a model of a fascinating steam tractor of the mid-nineteenth century by Burrell-Boydell. This device was designed to be driven over muddy ground followed by a plough and effectively laid its own tracks as it went along. David also had some small models made by his grand-children including an Asomasaurus or ‘bird with no body’!

Sam Medworth had a very convincing model of a Mark IV WW1 tank made from army multikit parts.

John Day showed us a fairground big-wheel that he is working and which should eventually be fully automatic in its operation. 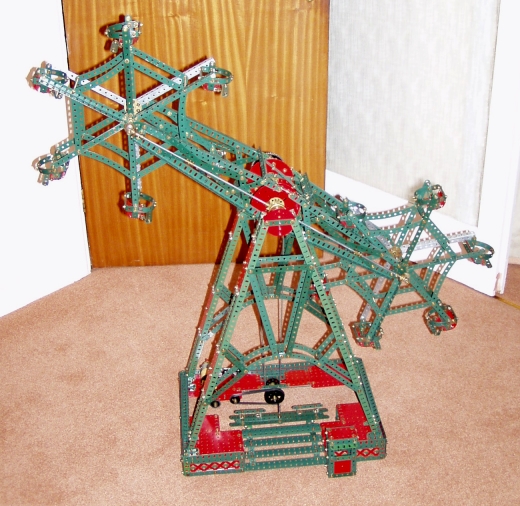 Richard was still working on his tracked mechanical shovel and showed us the improvements. 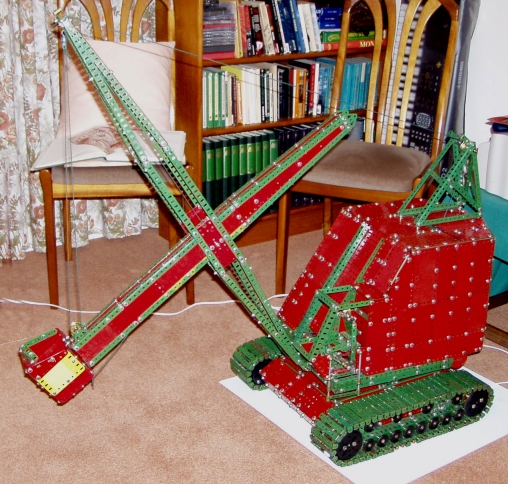 In the same area new member Anthony Foley is working on a model of the walking drag-line featured on the covers of manuals from the mid-50s to early 60s and demonstrated this to us. 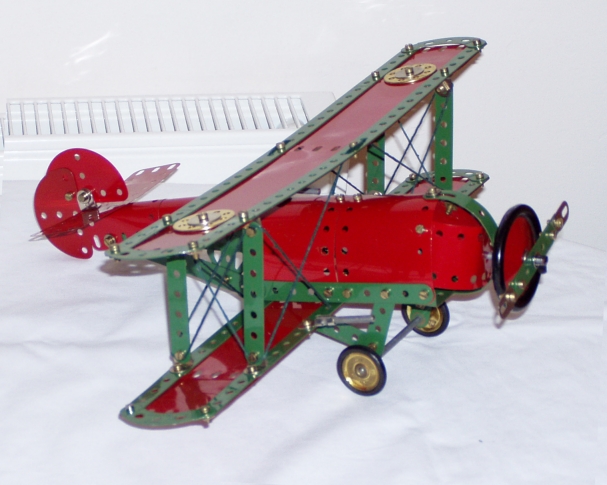 Just prior to the meeting a friend of Malcolm's had visited and looked through some 50s manuals. In them he found a No.2 set racing car and a No.4 set fighting bi-plane which he remembered making as a child. He begged Malcolm to make them for him in his older age! (60 next birthday) Malcolm brought the models along to show, together with a comprehensive collection of ‘small set’ manuals to cover the ages of all members! We were invited to recall the models we remember being ‘captivated’ by in our youth.